Robert Burns performs traditional Scottish and Irish tunes on the Great Highland Bagpipe for hire, busking, and for pleasure individually, in sessions, and as a member of the Cameron Highlanders Pipe Band. His primary piping interests are auld-style Scotch and Irish stepdance tunes (the ceol beag), haunting Celtic song airs (the ceol meadhonach), the auld-style great music (the ceol mor, informally known as “piobaireachd” below) of the pipes, composing, performing with non-piper musicians and singers, and busking which he does frequently with a djembe & conga player. Robert Burns proudly competes with a set of Strathmore pipes and silver-soled chanter made by Murray Henderson and has a set of Naill pipes adapted to play with a replica of a 1785 black Kintail chanter made by Hamish Moore keyed to A@440MHz for playing with other musicians and with greater tonal quality.

Robert Burns won the Professional Grade Piobaireachd Competition at the Scottish Fest U.S.A. in Orange County on May 27, 2016.

Robert Burns won the Grade 1 Piobaireachd Competition at the United Scottish Society Highland Gathering on 5/23/2009 at the Orange County Fairgrounds in Costa Mesa,California, the 2nd largest highland games in California.  Piobaireachd, which really means “piping” relates to the great music of the pipes.  This body of music is not for marching, dancing, or singing but, instead, is “mind music” of length with a theme, variations, and some complicated finger movements usually to commemorate, lament, or gather persons/events.  He also won the Grade 1 Piobaireachd Competition at the San Diego Highland Gathering on 6/28/2009 at the Brengle Terrace Park in Vista, California. 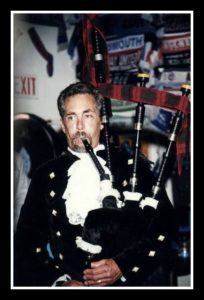 The College of Piping

The House of Scotland at Balboa Park

The House of Ireland of Balboa Park

The background picture is of Cape Breton bagpiper Stephen B. MacNeil (c -1875) and is used with the kind courtesy of its owner Taigh a’ Chiuil Mr. MacNeil is seen here piping while sitting for the accompaniment of Scotch stepdancing.

Robert Burns can be found on FaceBook as OBPiper or by clicking here.